My father used to write down and memorize the old Aramaic words that went out of use for one reason or another, and most of them were names for old tools that had disappeared or turned into antiques still kept by some, while their names are forgotten. That opened my eyes to the importance of documenting the names of these tools and how to use them, and this is when my story started and I began the long journey of documentation with my cousin Simon (and my brother in baptism), who shared the same interest.

We started with pen and paper by writing down just names that we used to collect from the elderly and anyone who lived with or remembered these tools. After that, in 2006, I bought my first mobile phone with a camera and the first voice recorder that I would use for my university studies, and soon I began using them to record and document tools, information and stories that talk about the history and heritage of Maaloula. My cousin and I used to spend much of our time visiting elderly people in our village. We would ask them any questions we could think of or let them speak in their comfort and take us on a journey back in time into the world of simplicity, love, goodness and inner peace.

Our activities peaked between 2006 and 2011 when we began to understand our history and heritage better as we learned what to focus on and what to ask. Over time we have developed our documentation equipment.

Our love for knowledge and everything related to Maaloula drove us to explore every inch of the village from its highest peaks to its deepest caves.

Today, I have an enormous archive of Maaloula’s pictures with a total of more than 25,000 photos. 15,000 photos were taken by me and the rest are from different photographers. 3,000 of them date from as far back as 1890 to the end of 1999. This photo collection complements a large amount of information that I have gathered from the elderly and from books.

In 2010, I obtained a Bachelor’s Degree in Economics from Damascus University. At the beginning of 2012, Simon and I had to move to Lebanon to work there.

In 2013, Al-Nusra Front, along with other jihadist groups, attacked Maaloula, killing and displacing its people, and burning and looting its churches and homes. This has been a massive emotional and psychological trauma for Simon and me. In the aftermath, we realized the extent of the tragedy and decided to do our best to alleviate the consequences.

Therefore, each of us has chosen our own path. Simon returned to Maaloula to directly contribute to revivifying and restoring what was ruined there.

I decided to keep my focus on the Aramaic language, as I realized that the displacement and dispersal of the people of Maaloula would be a direct cause of the language’s extinction and decline. My story has taken a different turn and I have decided to study Aramaic academically in order to be able to teach it later and thereby contribute to its preservation.

Being familiar with the names of the researchers in the Maaloula Aramaic language, I knew I had to reach Professor Werner Arnold, who is considered the foremost academic reference to Maaloula Aramaic. I contacted him and we met in Lebanon when he came with his students on a trip, and he advised me to pursue a scholarship so I could study full-time without having to work. I applied and met the requirements to obtain a scholarship from the German KAAD (Catholic Academic Exchange Service) to study the Aramaic language at Heidelberg University under the supervision of Professor Werner Arnold.

On December 8, 2017, I was awarded a Master of Arts Degree in Semitic Studies, with a grade of 1.3 point in the German grading system and a “very good” rating, which is the highest rating that can be achieved. The topic of my thesis was entitled: “The Aramaic Watermills in Maaloula”, where I studied and analyzed three records in the Aramaic language which I had recorded in the years 2007, 2009, and 2010. There are two main objectives in the research: Firstly, related to Molinology (the study of mills) and documenting what survived and remained in folk’s memory about Maaloula’s watermills, including how they worked and the names of their parts, etc. Secondly relates to Semitic Studies as well as analysis and study of the Aramaic text.

Publishing the thesis as an article:

In 2020, I also shortened, revised and transformed it into an article that will be published on December 15, 2021, in the 28th volume of a specialized academic journal called Mediterranean Language Review, published by Harrassowitz Verlag. 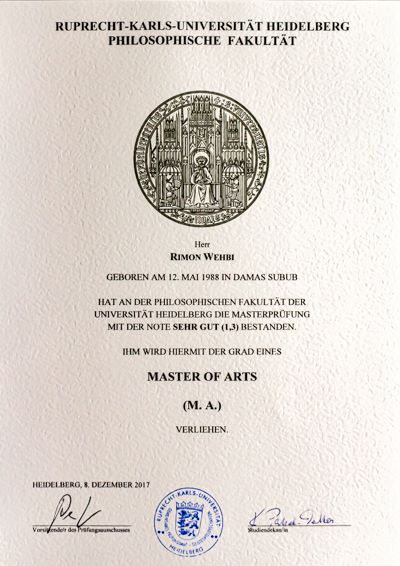 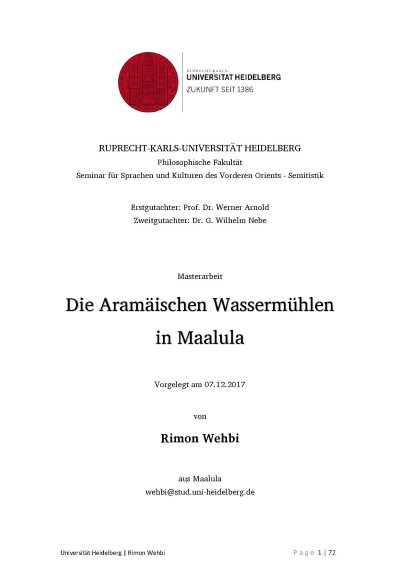 Of course, as intended from the beginning, and after completing my Master’s degree, I returned to Syria in January 2018. I stayed in Maaloula for two months, gathering real-life information and thinking about what should be done. I realized that I must first secure financial stability in order to be able to live in dignity and to finance and complete my researches on Aramaic in a neutral manner and without pressure from anyone. So, I have been working in optics with my father and brother, but at night and on weekends I continue my research on the Aramaic language, establishing what you are seeing now and what is coming in the future.

What you can read next: